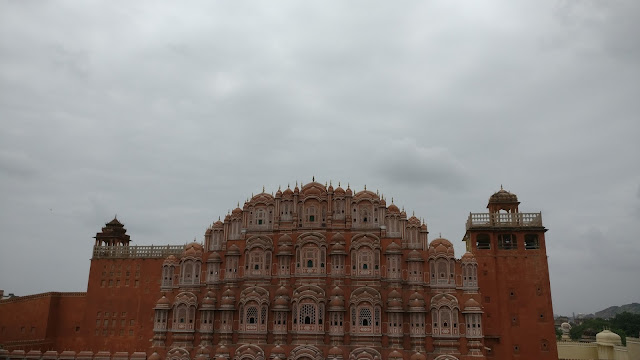 We were on holiday recently and travelled for the first time with two other couples k works with. We have in the past enjoyed travelling with friends multiple times, but this was the first with these folks.

These are people I know. Folks I meet and have eaten with, multiple times, over the last 6 years. We have visited each other's homes and socialized to celebrate occasions and sometimes just like that. Yet I didn't know what to expect from the trip. It's one thing to meet people for a few hours every few months. It's a completely different thing to stay with them and be with them over the course of a few days.

While I mostly enjoyed their company, the majestic palace hotel we stayed at and the general chatter, I loathed meal times. Suddenly the dining table became a no holds barred advice giving forum. Advice on what to eat and how and why and when by the two ladies who are extremely health and diet conscious (read stick thin). Each time someone reached for a waffle or ordered Puri bhaji, there was a five minute discourse about how unfit the rest were and what wrong food choices we were making.

I'm a fairly rational person. I understand when people  dish out well meaning advice  But there is a limit to the mumbo-jumbo I could listen to from ill informed people bent on making my long pending three day holiday into a 'correct your eating habits' workshop.

So I did the next best thing, thanks to early rising with Sage that's become a habit, I quickly began going very early and ahead of everyone to have my coffee and breakfast in peace. We are talking waking around 5:45, walking an hour and heading to breakfast by 7 a.m when only the staff is around and they're still setting up for service. I can manage every other meal in chaos and tune out the noise, but I need my coffee and breakfast in absolute peace, preferably eaten in silence. 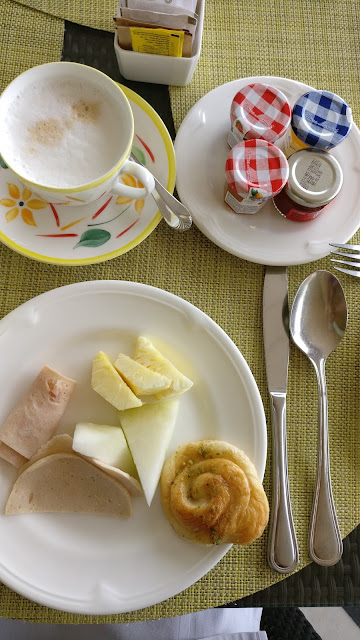 This arrangement worked to prep me for the rest of the day shared with other adults and a few kids and gave me enough time in the company I enjoy the most - mine.
Posted by arundati at 12:33 PM No comments:
Email ThisBlogThis!Share to TwitterShare to FacebookShare to Pinterest
Labels: people, stuff about me, travel

With my 17 year old niece, I try to be her friend. Hand hold her through this difficult transition from childhood to adulthood. She's the child of a single parent and carries the heavy baggage that comes with it.

One of the most docile and innocent 17 year old kids you'll ever meet.

Four days ago, a classmate of hers went missing. A girl who sat with P during accounts class. A girl she went out to eat pani Puri with. They used to go by the same bus and were living in the same colony. The girl was called 'modern, fast and with it' she had an ex boyfriend and wanted to be a model. Day one everyone assumed she'd eloped. There was comments galore and insensitive talk. To her credit P told us that she didn't see anything so she didn't say a word. She didn't indulge in the loose talk.

Day 2 a missing persons report was filed and a massive hunt was on. P was distraught terrified something bad has happened. She couldn't focus on anything and couldn't sleep.

Day 3 the kids were scared shitless that the cops would come to them for questioning. P was terrified what would happen but k sat her down and had a long talk with her. Reassuring at the same time telling her that life would throw up many more of these instances and she needs to harden up.

Day 4 the worst had happened. The girl that was missing was found dead. This is a 17 year old girl, a girl that studied with my niece. P cried and couldn't believe what had happened. There was speculation of sexual assault and the probable scenes replayed again and again through her head. She wanted to keep talking about it and we spoke to her with as much patience as we could. Helping her process this was important. It also told me that while she has been exposed to a lot of things, at her core she remains a girl with a sensible head on her shoulders, who evaluates risks and threats and tries her best to manouvre her path.

Day 5. The school declared a holiday and to take her mins off this I took her to class with me. I put her with a partner who was quiet and gentle and she did well. We came home after class to the news that an arrest has been made. The culprit, an old classmate and a boy the victim was in love with had strangled and killed her to get her off his back. P has met this boy. He's some sort of a hero and legend In their school. She couldn't believe it was him who did this. She kept asking me how a friend could do this. I had no answers.

This is a 17 year old. Who murdered a girl he was no longer interested in romantically. Who teaches them this stuff. Who makes them think they'll get away with this or that it's ok to kill someone you don't like anymore?

My in-laws moved to an apartment on our floor two weeks ago. I have a feeling this situation would have inflicted even more trauma on us if we were not together. I have never been more thankful to be around her than now. I am trying to sleep but cannot.

Followers of this blog

Find something you want